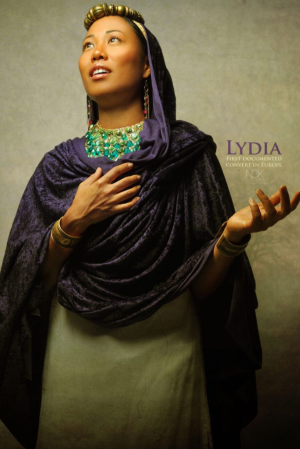 The Bible provides us with a glimpse of Lydia’s life. We are told that she was a devout Christian and a conscientious businesswoman, who eventually used her work to further God’s purpose. As a businesswoman, she was noted for her dealings with beautifully dyed purple fabrics. She sold dyes and dyed goods from as far as Thyatira.

I find it interesting that Lydia specialized in the color purple, specifically because there are patterns of symbolism attached to colors in the Bible. Among the Hebrews, purple was the YHWH, (YAHWEH) color, the symbol of the revealed God; (Ex. 24:10; Ezek. 1:26).  Purple is the color associated with royalty and majesty; the proper dress for kings; (Judges 8:26; Esther 8:15; Dan. 5:7, 16).

While on his second missionary journey, the Apostle Paul and his missionary team, Timothy, Luke, and Silas, traveled from town to town, visiting several churches. Eventually, they stopped by Philippi, a leading city of the district of Macedonia, a Roman colony. They decided to stay in Philippi for several days and on the Sabbath, they went outside the city gate to the bank of the Gangites River, where they expected to find a place to pray. They sat down and began to speak with the women who came there. Lydia, a worshiper of God, became a convert to Christianity through the Apostle Paul’s ministry. Upon hearing the gospel message, the Lord opened Lydia’s heart to receive the spoken word. Not only was she the first convert in all of Europe, but her entire household was baptized with her; (Acts 16:12-15, 40).

After they were baptized, Lydia persuasively invited Paul and his companions to come to her home, saying, “If you consider me a believer in the Lord, come and stay at my home”; (v.15). She exemplified the gift of hospitality to those she entertained and shared the good news of the Gospel of Jesus Christ. Lydia’s testimony helps us to understand the true message of Christianity and discipleship.

In the Book of Revelation, John reveals a series of seven letters that are written to seven churches located in the province of Asia. One of the letters is written to the church in Thyatira; (2:18). Thyatira is modern Akhisar, Turkey. it was famous for its dyeing and indigo trade. Located in a valley, midway between Pergamum and Sardis, it was originally established as a military base by one of the generals in the army of Alexander the Great. Although Paul started many churches, there isn’t a documented record claiming the Church in Thyatira spoken of in Rev. 2:18 was started by Paul. Perhaps it was Lydia’s testimony that may have taken the gospel message to Europe.

In conclusion, Lydia’s story was one of love and hospitality, and those she entertained she lovingly shared the good news of the Gospel of Jesus Christ with them. Lydia’s conversion marks the start of an epoch in the Bible. Is it possible that Lydia could have started a revival in her hometown? What we know for sure is that Paul didn’t start a church in Philippi. He visited the area, but he didn’t build a church there.

2 thoughts on “Lydia, the Queen of Purple”