Scripture: The word of the LORD came to Jonah saying, “Go to Nineveh and proclaim [judgment] against it, for their wickedness has come before Me; (Jonah 1:1-2).

Most of us know the story of Jonah or have heard of the big fish that swallowed him. But why did Jonah rebel against God’s Will for him?

The city of Nineveh was the magnificent capital of the Assyrian Empire. God called the Prophet Jonah to preach a call for repentance to the Ninevites. But, Jonah rebelled, and he attempted to run away from a divinely appointed mission. He felt justified in his actions because the Assyrians dominated the ancient world from about 885 to 625 B.C. They were an idolatrous, proud, and ruthless nation. It was God’s will that the Ninevites be given a chance to repent and receive His forgiveness for their sins. However, Jonah did not want to extend God’s grace to them. So, he decided to go to Tarshish, the opposite direction from Nineveh.

There are Christians who believe that Jonah had every right to express his displeasure and to exercise his God-given “free will” to disobey God’s command. Some Christians feel that having free will grants them permission to use it like a trump card used in a card game.

However, if Jonah had a free will in that aspect, it would have allowed him to override God’s Sovereign Will; at the expense of numerous unforgiven sinners. Also, it would have given Jonah higher power over God’s power. *Please note that there aren’t any conditional statements included when God gives a command. There wasn’t an option provided for Jonah to accept or decline his assignment; no questions or rebuttals were necessary. We serve God and not the other way around. God’s will is the only will that we should desire.

In Psalm 139, David described God’s Omnipresence and Omniscience this way, “O’ LORD, you have searched me and have known me. You know when I sit down and when I rise up. You understand my thoughts from afar. You scrutinize my path. You have enclosed me behind and before. Where can we go to hide from Your Spirit? Or where can I flee from your presence? If I ascend to heaven, You are there; If I make my bed in Sheol, behold, You are there. If I dwell in the remotest part of the sea, even there your hand will lead me”; (Jonah 1:1-3, 5,7-10).

“Where can we go to escape His Spirit? “NO WHERE!”  We cannot hide from God. He rules in all three realms, Heaven, Earth, and hell.  He occupies all space at all times” (Rev. 5:3). 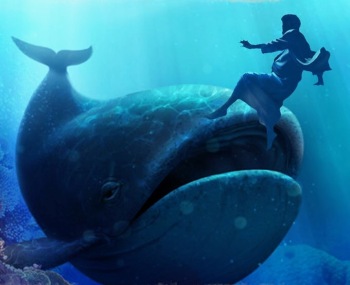 The Consequences for Disobedience

During Jonah’s journey to Tarshish, a violent storm arose, causing the ship to be tossed about, so intense that the sailors thought the boat would break apart. Fearing for their lives, the crew began to unload the ship’s cargo into the sea. “But, where was Jonah? He was in the lower part of the boat sound asleep.”

The captain was convinced that someone aboard the ship had angered their god, so he suggested they cast lots to uncover the responsible party for the disaster. They discovered that Jonah was responsible for all the trouble them. At Jonah’s request, they tossed him overboard, and the sea stopped raging; (v.v. 12,15).

“Now the LORD had prepared (appointed, destined) a great fish to swallow Jonah. And Jonah was in the stomach of the fish three days and three nights”; (v. 17).

From the whale’s belly, Jonah cried out to the LORD. With remorse, he reverenced God as the one and only true God. This began Jonah’s transformation. Jonah’s heart changed as he realized that God’s grace and mercy weren’t just extended to people who deserved to receive forgiveness but to everyone who needed a Savior. After pondering his thoughts, he received the revelation and was prepared to carry out the assigned mission. He revered God greatly and confessed that Salvation is from the LORD; (v. 9). The LORD commanded the fish, and it vomited Jonah up onto dry land.

After Jonah sat inside the great fish for three days and three nights, he learned that man’s will cannot override God’s permissive will. He realized that his disobedience led him to a stinky dark place, and his ill attempt to defy God was doomed to fail. He discovered that no one can run from God!

The lesson that Jonah learned was that salvation is available to all who repent, not only to the people that we feel are deserving of it. Although Nineveh was an evil nation, God chose to extend mercy and save them. The Bible tells us that 120,000 innocent persons did not know the difference between their right and left hand; (Jonah 4:11).

“Obey God and leave the consequence to Him.” – Dr. Charles Stanley, In Touch Ministry

My prayer is that every person who has read this article will glean from the treasures revealed to them and that every heart will receive revelational knowledge and use it wisely. Those who fear the unknown may realize that there isn’t any place you can go that God is not already there. May you come to know and love God personally and revere Him as He is holy, righteous, just, and sound. May every heart be obedient to God’s permissive will and not man’s will. I pray that each person will receive the wisdom to follow Jesus as the Holy Spirit leads them. May you walk upright before God, love, and serve Him with your whole heart. In Jesus’ Name, Amen.

*To receive salvation in the name of Jesus Christ, please click here

Bountiful blessings to you!