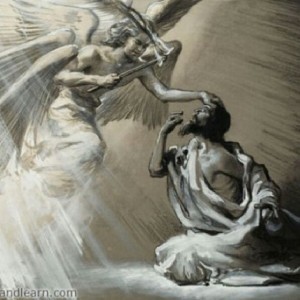 Scripture: “Then flew one of the seraphims unto me, having a live coal in his hand, which he had taken with the tongs from off the altar: And he laid it upon my mouth, and said, ‘Lo, this hath touched thy lips; and thine iniquity is taken away, and thy sin purged'” (Isaiah 6:6-7 KJV).

After King Uzziah died the vision of God was revealed to the Prophet Isaiah. The temple was opened to view and the prophet saw the Divine Presence of God sitting upon his throne. Above the throne stood seraphims, which are heavenly beings or holy angels. The name seraphim mean fiery, burning ones. They burn in love to God and in zeal for His glory against sin. The seraphim showing their faces veiled declares that they are ready to yield obedience to all of God’s commands.

In Isaiah’s vision of God in the Temple he was called to ministry. This is the only place in the Bible that mentions these mysterious creatures. Each seraph had six wings. Two wings covered their faces, two covered their feet and with two they were flying. They cried unto one another singing praises unto God as they called special attention to His glory and majesty (v.v.2-3).

In verse 6, the seraphim took a live coal from the altar and laid it on the mouth of the Prophet to take away his iniquity and purge his sin. This may denote the assurance given to the prophet of the pardon and acceptance in his work through the atonement of Christ. The live coal in his hand represents the word of God as compared to fire.

Thus, we find the Prophet Jeremiah making statements such as, “The word of God is like fire shut up in my bones” (Jere. 20:9); and “Is not my word like as a fire?” (Jere. 23:29). Because of the light and heat which it gives both to the saints and sinners, and for its purity and its purifying nature.

The altar of burnt offerings was where the fire burned continuously because the entire offering was burned. This was a type of Christ and the sacrifice made for mankind. This shows the doctrine of pardon which was founded upon the sacrifice and satisfaction of Christ. The symbolism here is that sin could not be purged alone of its own force. But could come only from the fire which consumed the incense that is laid upon the altar of God. Our sins are atoned for only by the blood sacrifice of Christ.

The message here is to get everything that is hindering your vision out of your sight and put God first. The prophet Isaiah did not see the vision of God until after King Uzziah died. His main focus was on his duties of serving the King first. After you’ve removed everything that is blocking your vision, God will begin to reveal precious and holy things to you. He will open your spiritual eyes to see things that you never could imagine. 1 Corinthians 2:9 makes it clear, “As it is written: No eye has seen, no ear has heard, no mind has conceived, what God has prepared for those who love Him”. Keep God first in all that you do.

Blessings of love from me to you!