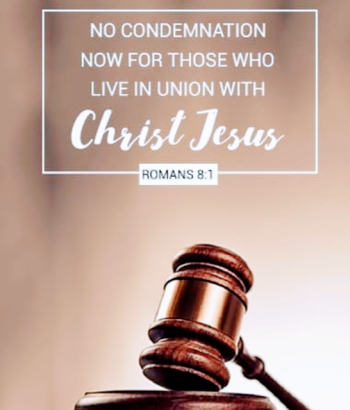 Scripture: Therefore, there is now no condemnation for those who are in Christ Jesus, because through Christ Jesus the law of the Spirit of life set me free from the law of sin and death; (Romans 8:1-2 NIV)

It all began in the garden where Adam was placed and given a simple law (Gen. 2:16-17). Though Adam was created without sin, he disobeyed God’s law. God then pronounced him guilty and sentenced him to death. He was the first man of the human race and his traits were passed down to his children. Romans 5:12 says that sin entered the world through Adam and death came through sin. As descendants of Adam, we received the sin nature passed down from our fathers. This declares us as being born into sin with a natural inclination to do wrong. Romans 3:23 tells us that we all have sinned and fall short of the glory of God. And if we claim to be without sin, we deceive ourselves and the truth is not in us (1 John 1:8).

In the Old Testament the Covenant brought condemnation because it revealed sin. The Law revealed sin within us and therefore condemned us. The Law judged man already convicting man of sin; (2 Cor. 3:7-9; Rom. 3:19-20; 5:12-13).

The word condemnation is synonymous with damnation, judgment, punishment, and destruction. In its strongest sense condemnation means “the banishing to hell”; (Matt. 10:33; 23:33; 25:41). For this reason animal sacrifices were offered once a year as a temporary method of removing man’s sins. Yet, animal sacrifices reminded us of our sins because it was impossible for the blood of animals to take away sin; (Heb. 10:3-4). It was a temporary method used until Jesus came.

As followers of Jesus, God has completely forgiven us of our sins because of Christ’s sacrifice for mankind. 1 John 1:9, tells us that if we confess our sins that God is faithful and just and will forgive us of our sins and purify us from all unrighteousness. God not only forgives our sins, he also removes them from us and from His presence, and He never remembers them again; (Ps. 103:12).

As believers we may be chastened by the Lord, but we are not condemned with the world. Because of our union with Christ through faith we are safe and secure. Although we may sin we are not condemned or judged by sin because of Christ’s redemptive work on the cross. We are justified by faith and therefore, made righteous by His blood, just as though we have never sinned. All of our past, current, and future sins have been forgiven.

Much love and many blessing to you!

6 thoughts on “Forgiven And Forgotten”